What autism really is.

So Suzanne Wright from Autism$peaks sent out more of the same hatemongering that was tired before her grandson was even born, about how autism is terrible because the faaaaaaaaaaaamilies and we might eat food from the fridge or something and that's the worst thing ever.

That is not what autism is. 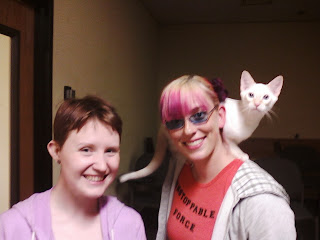 Autism is friendship, the kind you can only have when you meet someone who is like you. Allistic people don't so much understand what that is, because they expect that most people are on their wavelength. But Autistic people know how special that is, because it is rare and it is precious. Someone who understands intuitively, who speaks your language, is worth their weight in something way more valuable than gold.

And autism is community that comes together. There's this idea that we can't do that, but that idea is wrong. Never have I ever seen another community that takes care of its own so much. We have our issues, as all communities do, but we also have fierce loyalty and ferociously fight for and care for our own. We know what it is to not have that. Again, we know how beautiful that is once we find it. 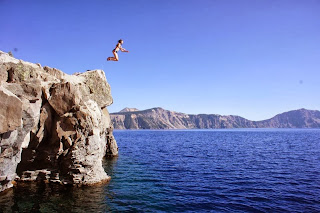 Autism is adventure. Or craving it at least. Jumping into that freezing cold water because it was there. And then jumping in again and again because it was freezing but it was a delight every single time. It may not be the normal thing to do, but it was better than normal. It was exhilarating.

Jumping into that water? I felt more alive than I think most people ever do. It was just me, the air, then the water. The sensation of my stomach rising? Stopped time until the water woke me up. It was actual perfection in an experience. 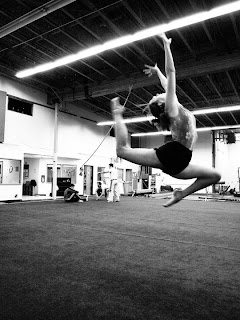 Autism is focus. This leap is called a double stag. My focus was right on the sole of my foot, visually speaking. Internally speaking it was only on what I was doing. There was no thought as traditionally described. There was me, music, the mat, and movement. That's it. I can do that. I cannot meditate in the usual sense, but I can become one with movement. Everything else goes away.

So it is when I am focusing on something that I love. The way I love? It is deep. Autism is deep love. People write it off as special interest or obsession, but even if it's not something I can excel at, I can excel at loving what I love, loving what I do, loving who I love. Autism is being able to be consumed by love and interest, it is giving 100% because it is an insult to the thing one loves to give any less. Autism is going big or going home.

Autism is finding myself and losing everything else while jumping, flipping, spinning. And this is the best thing ever. 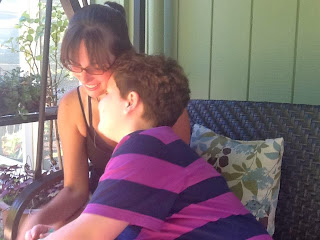 And now we are back to autism is love and community. Autism is also sharing. Autism is knowing people because of autism. My young friend, Leo of Squidalicious fame, shared with me. He shared his iPad and his stims and his love. And he and his family are just a few of the many people I care about deeply who I would not have met if there was no such thing as autism.

No one ever said that being Autistic is easy. But we do say that it's worth it. We're okay. We love and deserve to be loved.
Posted by Neurodivergent K at 2:51 PM

Wonderful pictures! Thanks for sharing them.

My cat loves to jump up on my shoulders like that, too!

You're a lot more than just o.k. You're fantastic! And brave. Just the thought of jumping off of a cliff into water like that scares the pants off of me! Thanks for sharing your pictures and your experiences with us :)

This is lovely Kassiane. So much great stuff is being posted.

This is a great post, and I especially liked your point about giving 100% to something you love.

Thanks for writing this and posting the wonderful pictures. Wish there was an offline Autistic community where I live.

"Autism is going big or going home."
One of the best lines ever written.

I absolutely loved this entry!! well said kassiane and absolutely spot on. thank you for writing this


different
delectable
and full of delight

different
delectable
and full of delight

This is an especially great blog post. It deserves to become a meme for the autistic community.

Note: I self identify as autistic, and have an autistic 5 year old son.

Kassiane, you have written a beautiful paean to people on the Autism spectrum. How wonderfully you have stood up to the dreadful imagery being espoused by certain Autism groups.

Keep up the wonderful work!