People think I'm exaggerating when I say I cannot cook. But really, I cannot. Between not noticing I'm hungry until I can barely stand up & difficulty sequencing tasks & a penchant for weird things happening around me, the kitchen is not a safe place for me to try to do shit. I can microwave things. And that's about the extent of what I can do consistently.

For your laughing at me pleasure, here is a selection of stories of my kitchen mishaps.

Anecdote 1:
When I was about 16, I was making macaroni and cheese, because fuck yeah macaroni and cheese. I was taking the pot across the kitchen to strain the pasta & had a partial complex seizure. Somehow during this I managed to spill the water alll the way up my arm, giving myself 2nd degree burns. There was nothing going on to trigger the seizure, I didn't feel it coming, it just couldn't wait 10 more seconds. I still have a bit of discoloration on my forearm.

Anecdote 2:
Many years later I lived at a Y, which had a fairly decent kitchen, and no microwave. We (my friends from the shelter and I) were going to watch a movie in the common area, so we chose to make some popcorn.

Um. So. It's absolutely possible to burn half of the popcorn while the other half doesn't pop at all. Putting butter in? That does not help. I would say it hurts. Setting it on fire may have been helpful in terms of cleaning out that damn pot.

Speaking of cooking at the Y. We tried to make s'mores over the stove (yeah, I'm a rebel...). My marshmallows would not catch fire. The one thing I wanted nice and toasty wouldn't burn. Go figure, right?

Anecdote 3:
My first apartment! The Pit of Despair! It was not a nice apartment, but it was mine! I had a toaster oven, a stove, an oven, and it was kind of a terrifying place. But it's hard to screw up too badly with a toaster oven, right?

Things to add to the list of things I have set on fire: Frozen chicken legs. While otherwise still frozen. It was utterly inedible, because the parts that weren't charred were frozen. This is when I started mostly getting prepackaged food, because seriously? This is getting to be a bit much.

Adventure 4:
Did you know plastic bowls, even those marked microwave safe, they melt.

It wasn't even in there that long-I like to put frozen potatoes, cheese, butter (high fat needs ftw) and bacon in a bowl & let it all melt together.

I don't like it so much when the bowl joins in the melting fun.

And 5:
Other things that can catch fire and be raw at the same time: PANCAKES. Usually I can make a decent, if slightly wrinkly, pancake, but apparently not always.

6:
I posted this one on facebook. Cookies, like pancakes, can be on fire and undercooked at the same time. They were supposed to be chocolate chip, but the chips all melted so they were just chocolate, & it was an extremely smokey fire. Oh. And potholders? They can and will ignite.

and the most recent:
I am decidedly a firebender, or alt universe Katniss (the girl who set things on fire, rather than the girl who was on fire), or something.

I set a potlid on fire trying to make hardboiled eggs. Granted, the potlid was on the stove. I kind of suck at getting the dial to burner thing right. It was before I had coffee.

Had it just cracked with the heating up and cooling again thing, I'd understand.

But nooooooooo. GIANT EFFING FLAMES! And then it cracked and, while it was supposed to be shatterproof glass, it decidedly shattered, albeit all in one place. None of the shards flew more than 18 inches.

Activities of Daily Living, ladies, gents, and others: I fail them, unless making fire by boiling water is the newest ADL.
Posted by Neurodivergent K at 4:32 PM 5 comments:

I mentioned a couple posts ago my emoting/sick/other flow chart. And I threw it all sloppylike on my computer. It's sort of this: 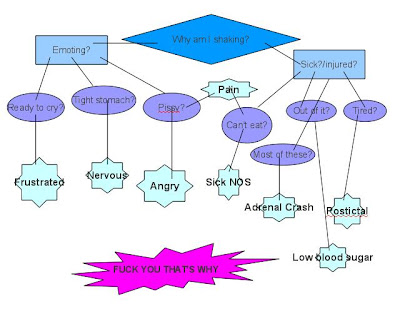 Some of you may have noticed that there is a ChipIn widget on the sidebar, asking for help sending me to Autreat.

The dealieO is this: TPGA paid my transit, I paid my registration, it was spendier than anyone anticipated, & it kind of financially hurt everyone a bit (more than a bit). But it was very much a "now or never" situation, so worst case I'm very economical about food for the next forever & sloooowly pay TPGA/myself back out of teeny widdle SSI checks/tutoring/etc. TPGA is not requiring me to pay them back, but the travel costs were expensive like woah & I'd like to be able to do so.

The lovely Amy Sequenzia, a non speaking Autistic poet & self advocate, has graciously offered (I cried, not gunna lie) to send one of her poetry books to donors of $20 or more. She offered 30 of these books. Because she is an awesome human being. And yet another example of why I love my Autistic community.
Posted by Neurodivergent K at 1:05 PM 6 comments:

"But you're soooo high functioning! If you had other problems you'd want a cure too!"

I hear that all the time, and what you are saying when you say that is:

"Neurodivergent K, I have never listened to anything you have said ever. I have never met you in person, and all I know of you online is that you say things I do not like, so I made assumptions about you based on your ability to use the Oxford comma."

Cuz here's the thing: you don't know what I am like in person. Even if you could define functioning labels-protip: you can't-chances are pretty good that I'm not what you are assuming. You don't get to say what my experiences are.

This past weekend I was at an adults mentoring teens event. After, I mentioned that I had not disclosed that I am Autistic to anyone at work. For some reason this is the most hilarious thing any of them has ever heard--something about my closet having glass doors. I am noticeably different. I'm awesome, but I am a weird weird kid with obvious sensory processing issues & obvious language processing problems. So there's some evidence that your "all you neurodiversity types are indistinguishable". I'm not.

Nor am I without the other lovely autistic addons. You know, like sensory processing problems. Like face blindness. Like very high pain threshold and the accompanying difficulty localizing pain. Like alexithymia. I have a flowchart on my wall to help determine if I am having an emotion (and if so, what) or if I am in pain or if I am sick. But I am indistinguishable from peers, because I can write well.

And, you know, when you go on about other health cooties meaning autism needs to be cured, first: you're wrong. Those other cooties aren't autism. Second: it's mightily presumptuous for you to assume that because I do not want to be cured of autism, I've never experienced a health issue in my life. Cuz I have. And I do.

I've got recalcitrant (ok, the doctors call it "medically intractable") epilepsy. I've got adrenal insufficiency of unknown eitiology. And I have other cooties that are none of your damn business, but I assure you, I have had health problems, and I have had to fight to get them acknowledged as NOT just autism, because of the BS people spread about autism being some part of some sort of systemic thing. I assure you, endometriosis is not an autism symptom, but thanks very much for the delay in proper treatment since they decided that abdominal pain means that, since I am autistic, I just need to poop more. It was a great 10 month delay.

(edited bc my formatting got lost. I forgot where I had had paragraph breaks so this is probably not how it started)
Posted by Neurodivergent K at 12:06 PM 10 comments: