We Are Like Your Child is a new, exciting blog collective of Autistic (capital A) bloggers, with the occasional allistic disabled poster.

It's for the stories that so often aren't shown in the media: those where we have difficulties and yet we problem solve creatively, we live with our disabilities rather than the whole "in spite of" and overcoming thing. Or the stopping and dripping in tragedy. This is a slice of reality from Autistic people.

It'll be a once weekly blog (or more. Maybe. But once weekly for sure) & I'm sure many people who read here would like to check it out. It's highly unlikely to be as firey as here--it's just a place where we can show things that won't make it into a "Success In Spite of Autism!" type anthology, nor are they the stuff of woe is me human interest stories, nor are they inspiration porn. It's just that yeah, we do have difficulties, yeah, we can work around some of them, and  yeah, we're people even if we can't do some stuff.

So. Some of you might be interested in that. People who find here too political might too. Cuz we are like your child, and that's a good thing for all involved.
Posted by Neurodivergent K at 3:56 PM 4 comments:

I am jet lagged, so this is going to be quite the ramble.

It's Autistic Pride Day, the day those of us who are culturally Autistic (and maybe those who aren't?) celebrate our neurologies. But what really does that mean? As people always ask me, what is there about autism to be proud of?

I'm proud to be part of the best community ever. We aren't a community with a lot of resources, but we're a creative, loving, generous group, on the whole. The community crowdsourced a friend of mine to Autreat! Most of them haven't even met her yet! (but they totally should). And we got medical care for the sick cat of one of our own. Generosity, we have it. It's moving, how much Autistic community does what we can for each other.

I'm proud of my community for standing up for what is right. There have been several flash blogs this year against hatred of Autistics & erasure of our accomplishments. Whenever one of our number is killed or brutalized, the Autistic community is there saying that isn't right, facing down truly triggering, hateful comments, not allowing evil to win. It's Autistics who have vigils to remember those killed for being autistic. This is a big undertaking, a sad undertaking, and yet we do it because it needs to be done. When a hospital was trying to deny care to an Autistic woman, it was our community that raised holy hell, tied up their phone lines for days, made a righteous stink. Because it is right. Because that is what we do.

My Autistic community is a daily reminder that I am ok just as I am. It's a place, a family even, where my particular strengths, weaknesses, and inability to let injustice go are valued. They are the reason I survived a few times.

The Autistic community, my chosen family, is why I am proud to be Autistic. I love y'all, and wouldn't have you any other way.
Posted by Neurodivergent K at 1:18 PM 8 comments:

My wibbly wobbly rantings about the murder, yes murder, of Alex Spourdalakis.

I have been too torn up to write coherently about this. So I ranted at a webcam instead. Many thanks to Lynn for transcribing so I didn't have to.


Ohhh wow so that's an attractive face...I was mid sneer apparently (the still of the video is a washed out person who isn't that fair in real life with pink & purple hair and blue glasses making...a face. Eyes are narrowed, lip is quirked). I was very upset when I wrote this, and it was before I knew that Dorothy Spourdalakis was charged with first degree murder, and way before I knew that she'd been offered services and declined them. The sweariness would have been much more so.

Thank you update, with pictures. And Where we're going from here.

Again, thank you everyone who helped with the fundraising to get Mandy to Autreat. She is super excited. It's going to be quite an adventure-Mandy, me, & service cat Purkinje. 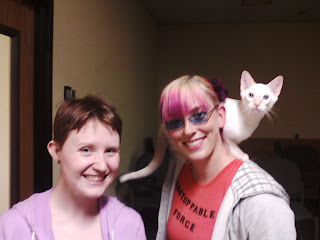 We have purchased plane tickets, the necessary motel room for when one flies to an event on the east coast from the west coast, and set up getting from there to Autreat (YAY).

And now. This was amazing. So where do we go from here?

If you are my facebook friend you know: I am setting up an Etsy to sell crafty goodness, all the proceeds of which will go into an Autreat travel fund to get people there. Making the things for the donors was fun, and Mandy knits, and a friend of mine makes pop culture counted cross-stitches, and there's a huge pool of talent. And people buy crafty stuff year round. And we can make things that are relevant to more than just our community, which is important I think to get the momentum going.

I'm excited. Overwhelmed with half formed ideas & the amount of purple beads I have, but excited.

Some things I made this year: 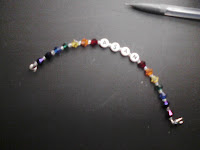 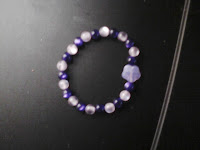 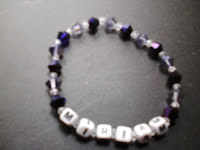 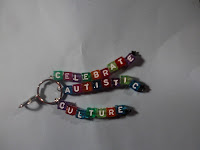 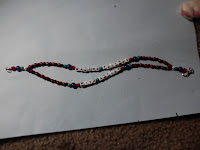 Things I will make throughout the year? Similar, and medicalert bands, and left/right bracelets, and whatever else I can make. I want more friends at Autreat next year.
Posted by Neurodivergent K at 3:05 PM 1 comment: