Content notes: this discusses stalking & other boundary violations. It also discusses systemic issues that allow that. There are pictures, including a picture of a vaguely torso shaped thing with arrows in.


This week has been weird and basically the last semi-normal thing I remember from this weekend is being asked the title question on Saturday morning, so I am going to give context. And then I am going to answer said question.

I brought this target to archery, like one does, because I'd just heard from a long time very unwanted internet harasser. Again. 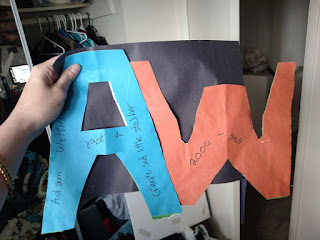 It's the initials of said long time very unwanted internet harasser, with my editorial comments, including the words "creepy sad little stalker".

So. Then the question was asked: "you're a skilled archer. Why do you have a stalker?"

This is my blog! Let me tell you why! (general you. You, the reader. Assuming you don't already know why).

The flip answer is "because I live in Oregon. Stalker lives in Florida. No one is that skilled" but there's also actual a lot of systemic junk that matters in a serious conversation about such things.

This is going to need to start, again, with context, going back to when I was an unjaded, barely cynical little baby K just jumping into the world of advocacy. Back when I didn't think self advocate was patronizing and silencing. Back when I thought if I was smiley and adorable enough, people would suddenly see the humanity in me and in their kids.

Yes, really, this was an era that existed.

So. To understand why I have someone persistently contacting me even though I told him to fuck off, you need to know why he fucked on. Back in the early AOL days, when we were just kids--there's an 14 month age difference or so, and all the safety stuff back in the day was "make sure you aren't actually talking to a creepy adult who preys on kids." It was not "some of the boys you are friends with who are your age will grow up to be scary when you diverge in fundamental views." No one told me that. People to this day actively avoid telling girls that.

Way way back in the day, creepy sad little stalker and I were friends. He is autistic. I am autistic. We were exploring this whole world of autistic community and autism community. But our views started diverging pretty drastically; I grew into a hardline neurodiversity activist. He grew into someone who whines about how autism ruined his life and he wants a cure.

This is mutually incompatible, no? So I started withdrawing contact because I do not need in my life supposed friends who think that people like me are lesser. I don't really need friends who think they are lesser either. I didn't have the terms "spoons" or "emotional labor" then. I did have words for things like "I know you think we're destined to be together even though I don't understand your logic, but no we aren't not even a little" and "leave me alone" and "I'm not having this conversation" and "go away." I started pulling away, saying "leave me alone", at the turn of the century.

In 2005 creepy sad stalker crashed an actual line. While before that it had been a lot of "he makes me uncomfortable", for reasons I will get into later in this post that didn't really matter to anyone. Him showing up at the ASA 2005 conference with the stated goal of getting in my pants did. That is a line that most people will acknowledge is a line. Following me around trying to get me isolated? A line that more people notice.

(not entirely relevant but also not entirely irrelevant is that ASA 2005 was right at the beginning of my span of time spent very critically ill. So he was creeping on a tired, sick, dropping weight very fast K. That's relevant in the nuances, but not the big picture maybe?)

After that it was a big hard nope we cannot at all be even vaguely friendly. I spent an entire conference clinging to safe people because creepy sad stalker was making me feel unsafe. A couple times a year he still sends me an email that's a mix of "I'm sorry but here let me give you excuses and also say things that are meant to sound intimidating". 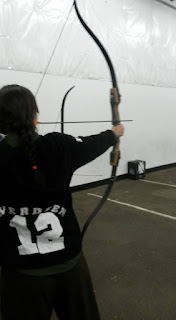 I think that about covers the how I picked up a stalker. As for the skilled archer part? I've known how to shoot forever, but in the late 90s and early 2000s that barely registered on "important parts of my identity". So even if my ability to hit things with projectiles was going to be a factor--and it probably wasn't--other things were much more prominent in the list of things that make me, me.

Skilled gymnast? Yes. Fearless advocate? Yep. Funny in the words? Yeah. Made of eyes and Princess Leia buns? Uhhuh. Great with kids? Sure. Weirdly flexible? Actually not so much because I didn't realize what normal was at the time. On the internet, the aspects of you that you find salient are how you are known, and "oh, I did horseback archery and stationary archery for a few summers" weren't ever part of the conversation. I was too busy flying, or telling people that no really your kid is fine, I promise, you better believe I'll babysit, behold, your kid adores me.

...some things never change. A lot of those things, really.

So now the question becomes "why do you still have a stalker?"

There's a lot of answers to that question.

First, because of the distance. Sad creep and I are on different coasts. Police forces have not heard of airplanes apparently. Indeed, their go to suggestion when people are being scary on the internet is "hang up your computer". Not to suggest that the offender should maybe leave people the fuck alone. No one wants to handle it. I have called this guy's parents--he's 30 and a bit--because of how many fucks police don't give. Not like his parents cared either, because he is made of excuses.

Second, let's be real here: there are gender issues (and race issues, though in my case they're largely intertwined--people expect super compliant lady stuff from me because of my race. That is not and has never been me). He sends me whiny pants messages about how his disabilities mean he can't not be a douche and wraps them around "and let me tell you how much I can bench or whatever because I decided to try to do a sport and oh let me say again that I can lift way however much". That's an intimidation tactic. It's also so accepted for men to do that no one cares. They tell me that maybe he's trying to impress me.

Whereas when I post a picture of the destroyed target, I have to be careful to not use one that could be taken as a threat. Men try to impress women, but women who can take care of themselves are threatening and scary, I guess? The natural order of things is that I'm scared of him? Turning it around by actually having skills, and advertising them, is not. If I was a dude, advertising would be fair warning, but since I am not, it's being threatening. Nevermind that he's the one sending me things that sound like intimidation. Not being intimidated is a bigger issue. 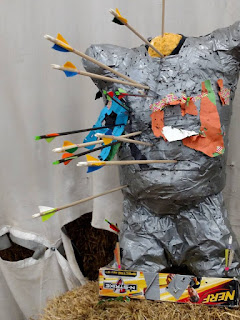 And then there's the thing no one wants to talk about:

We're both autistic. Now, people are quick to tell me that he can't be held to any standards at all because he's autistic. That he cannot understand that a very clear "fuck off, never talk to me again, I mean never, let me call your dad to explain it to you what 'never' means" message means exactly that. He has poor social skills, because autism. He's a lonely sad self pitying sack of crap because autism. He has fixated on me because autism. No expectations of decency or fucking right off allowed.

However, I am autistic too. And people expect me to coddle him because I should know what it's like. Because apparently I have magic angel powers or something. Because by not telling him to fuck off when I was 16 somehow I gave him an in to fixate on me until the end of time. Because he can be a creep, but defending myself is kicking a puppy. A puppy with adult skills I do not have, no less. But gender roles dictate that I should nurture him or be gentle or whatever. Then his not understanding gentle (or rude. Or ignoring. Or anything) is still my fault, because autistic women can't win.

So that's why I'm a skilled archer with a stalker. The archery is largely irrelevant except where using it could get me in big, terrible trouble. Society is set up to coddle his wee little feelings, to encourage him to be creepy and scary, particularly at people like me. 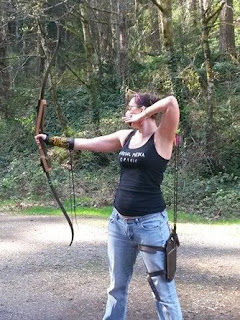 Posted by Neurodivergent K at 10:53 PM

Your stalker sounds like an assassin sent after neurodiversity activists.

Wouldn't be surprised if A$ acted on their Stalinist delusions...