So Autism Daily Newscast told a falsehood. And doubled down.

In the screenshot, a lie is highlighted. The lie that neurodiversity proponents don't consider autism a disability.

We do. We just don't think that means we need fixed: 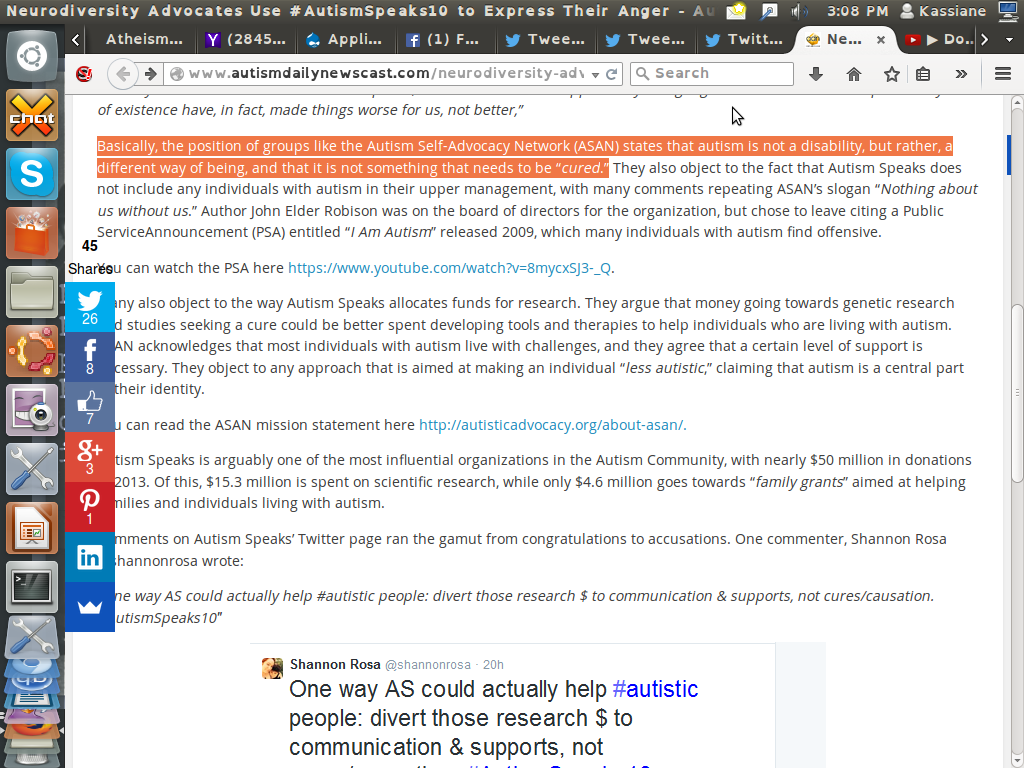 Highlighted is their lie, which says " Basically, the position of groups like the Autism Self-Advocacy Network (ASAN) states that autism is not a disability, but rather, a different way of being, and that it is not something that needs to be “cured.”"

That is not the position of ASAN or any neurodiversity activists I know.

So I sent this email:


Ok so this is upsetting.

You lied when you said that neurodiversity activists say we aren't disabled. That is a position that has been SOUNDLY rejected, refuted, and is just flat out nope.

People who *do* say we believe that, exist. However, they are lying. And they are not neurodiversity activists.

That is at best unprofessional and at most likely, disingenuous. This is seriously 3rd grade stuff.

Some simple rules:
1. Talking to parents isn't the same as talking to autistic people, unless they're autistic parents.
2. Trying to get information about what neurodiversity proponents mean by talking to people who reject the neurodiversity paradigm is...there isn't a word for how wrong it is. It's like asking the KKK about racial justice, ok??
3. When you choose to do these things anyway, you intentionally spread lies.
4. There's no excuse, as twitter is overflowing with neurodiversity people.

When will you publish & promote your correction of this willfully ignorant statement that spreads lies & makes it even harder for people like me to get services? Since apparently thinking you're ok, disability & all, means you don;t need help, bc of lies like yours and those of your sources?

Seriously. You owe us a correction & a big honking huge apology. Prove my low expectations for you wrong by actually delivering.

And I got this back, an email that wasn't supposed to go to me but instead to the emailer's higher up:

Shan -please deal with this - I am not even reading it tonight. I do not believe we said any such thing but maybe I missed it.  Perhaps she could quote the place we said it?
R


So, we have denial the first. Followed by her feels parade:

I am so upset that I replied to you rather than Shan Ellis my editor. I am deeply offended by your comments.
Roberta Hill
Editor-in-Chief
Autism Daily Newscast

This is what I said back:


You don't really have a right to be offended here, given that *you* lied about *my* community.
you said " Basically, the position of groups like the Autism Self-Advocacy Network (ASAN) states that autism is not a disability, but rather, a different way of being, and that it is not something that needs to be “cured.”"
And that is a LIE.
If you don't like being called out on lying, don't do it.You have no right, though, to pull the "so offended" card. You're the one who said to email you what I meant. I did. You're the one who ok'd a lie. This isn't about your feelings, this is about you misrepresenting the facts.


I quoted for them, as requested. Then I get their other person being all condescending and a jerk and derailing in my inbox, because why not ignore the point? We can't actually address the point, that'd be silly:

Thank you so much for your email. Unfortunately at this time we have no error to correct.

I am on the Spectrum myself, and work as a journalist and editor. Our role on Autism Daily Newscast is to report the news without bias, and collect information to present as part of articles for the general reading public.

To say that we are lying is indeed a defamatory statement, to repeat this defamation on twitter, or any other social networking site, is in fact under Section 10 of the defamation act a civil actionable offence. I would rather not have to go the extreme of a court case. I hope you feel the same, but we will defend the honour of our articles and writers to the last.

We do take a broader view and interview people often and in the case of this article we talked to a collection of neurodiversity activists.

We are not here to judge what other people believe, we simply report news.

I would like to take a moment and remind you that some autistic people require advocates. The responsibility of advocacy for a child who is non verbal and (I despise this term) low functioning, falls to the next of kin or guardian who is usually the parent. I agree with you to some extent that if the individual can communicate there is no better way of understanding than to talk to the individual, not a third party. Unfortunately for some there is no other means to communicate.

I find your comparison with the KKK wholly unacceptable and in incredibly bad taste. We have presented for and against arguments from both sides of the fence and do not feel the need to justify why we have taken this stance as we are completely neutral.

"We intentionally spread lies". No my dear, we report news. Again we are completely neutral and present both sides of the story to an audience who enjoy reading us.

I sincerely wish you all the luck in the world,


Thing is: it isn't defamation when you say someone is lying when they're actually lying.

It is a lie to say that ASAN's position is that autism isn't a disability.

ASAN is anti cure. That does not mean "autism is not a disability". Those are not synonymous.

And don't even with the condescension. Just don't. All that indicates to me is "don't even bother, just put it on the blog".

Because I actually have more faith in people than they deserve (or that I'll admit to) I sent one more email before starting this blog post. Maybe they just aren't understanding the words that I am saying!


No, you lied.
When you said neurodiversity proponenets say autism is not a disability, you are LYING.
That is inaccurate. Had you fixed it, it would have been an error. As you are doubling down, it's a lie. People fix errors. People double down on lies & try to justify them (do not lecture me on people with differing support needs. That is not relevant. That has nothing whatsoever to do with you spreading falsehoods about what neurodiveristy proponents believe. Many neurodiversity proponents *are* nonspeaking for pete's sake).
I see my low expectations are well founded.


And they sent me back more condescension, because why not?


Kassiane,
I see there is very little point in continuing this conversation as you fail to see we are a neutral organisation operating to bring news to the autism community (which I am wholly ensconced in being diagnosed with Aspergers).
We truly wish you the best, but at this time this article stands true to the way the reporter has composed it.
Glad to be of service at this time


This person seems to think the "autism community" and the "autistic community" are the same thing, rather than vaguely overlapping sets.

She also seems to think that ASAN is "autism self advocacy network". ASAN uses the identity first Autistic pretty much always.

And I agree, having this conversation is a waste of time. It has nothing to do with neutrality, it has to do with actual misrepresentations that turned into deliberate lies with the refusal to correct them.

So. Here's that pile of correspondence.

Posted by Neurodivergent K at 3:40 PM

I'm not even a journalist, but even I know that if a member of a minority group I don't belong to calls me out on a mistake it's time to stfu and *listen*.

Well, I was among those who partook in the #ActuallyAutistic siege of Autism $peaks' hashtag, but I do not at all consider my autism a disability, as it has, in fact, been a propeller in several aspects of my life. The enthusiasm with which I binge-read about a fixation du jour seems to me like an appended extra ability. A superpower, if I do say so myself.

Additionally, is there truly a difference between the terms 'autism' and 'autistic' aside from the latter being an adjectival derivative of the former?

Maxwell, much of the reason Autism is disabling is because the society we live in is not set up for and is not accepting of autism. Of course you get to choose how you feel about that, but ASAN believes it is a disability and neurodiversity activists do as well.

Yes, there is a difference between using autism and autistic... When you say "person with autism" it is suggesting that autism is something completely separate from the person, but it's totally not. It's like suggesting I can pick and choose where I leave my autism...I am Autistic, autism is a part of me, makes me who I am. You can't separate the autism from me, if you did I would not be me. Autism is a part of my identity.

Autism has been a propeller of many aspects of my life as well, and it's still absolutely a disability.

There are autistic people who don't consider autism a disability, at least for themselves. That is not the position of the neurodiversity community on average. ASAN is a *disability rights* organization.

I don't like all this fighting, it saddens me. I feel I was disabled growing up, not because autism disabled me, I work just fine, but because my environment response was negative to my autism, and I had no tools to deal with that, it left me with extreme self esteem issues, insecurity and anxiety from bullying that I still battle with today. The word 'disabled does not describe the cause or effect, like saying your car broke down, is it 'broke' because something wrong in the mechanics, or it 'broke' down because you need to out some gas in it. I see some difficulties with the semantics.

Wow, you know what's extra shitty? If you accidentally send the wrong email to someone, demonstrating you insulting them behind your back, you own that and apologize. All she did was emotionally blackmail you with "I am so upset" and "I am deeply offended". Not once did she apologize for sending you an email in which she stated she wasn't going to read your complaint - terrible customer service.

In addition the patronizing "my dear" and "wishing you luck" later combined with the implicit legal threats are really awful, manipulative, patronizing communication. Everything about this is grossly unprofessional and mishandled, so it's not remotely surprising that they refused to retract their lie as a mistake.

i've been sitting here staring at the screen with my mouth open, trying to decide which part of this makes me angriest. it's really hard to find just one thing, though with a gun to my head i'd go with "my dear."

for the life of me, i will never understand the "i'm so offended" stance. it just .. no.

They've apparently taken down the article... which adds intellectual dishonesty (and possibly a cover-up) to the list of things wrong here.