This week, a video was released of a young man who thought he and some other kids were participating in the ALS ice bucket challenge. Instead of ice, the other kids dumped a bucket of sewage on this boy's head. And they filmed it, so as to spread the humiliation.

They released a video of their child being drenched in the contents of a toilet, taken to humiliate their son by spreading it, and it is now being seen worldwide.

These parents did exactly what the bullies wanted. They are humiliating their son on a global level. How did they think this is a good idea?

They mean well, they say. They're pressing charges (and I hope they nail the other kids to the wall). They say they want to spread awareness or something (disclosure: I do not know the child's name & have been immediately shutting all articles that link to the video. I will not participate in the humiliation of this boy.) but could they not do that without plastering around the internet the video? Would it not have been more poignant and more ethical to ask the young man his thoughts on the matter? That would humanize him, as opposed to showing a video that was made solely to mock.

This is part of a disturbing trend that I see from parents & caregivers who "mean well", who love the Autistic in their life. This trend is that of publicizing the Autistic person's often very painful social difficulties, spreading them far and wide to get support or 'raise awareness' and a variety of other excuses.

This is slightly different from the parents who post their child's most vulnerable moments to get sympathy, but...not really. The main difference here is are they saying they want sympathy for themselves, or are they purportedly doing it "on behalf of" the autistic person? Either way, they are spreading private, often embarrassing things about their child--I remember earlier this year a mom trying to have a virtual birthday for her child who has no friends, do you know what it's like for everyone to know you have no friends? It's awful. Now magnify this by millions. And they may not be gaming for Good Person merit badges, but they sure seem to get an awful lot of them. More than the people who are blatantly embarrassing their child for sympathy even, because golden intentions.

Fucking think first. Use that empathy you supposedly have. Think "if that was my name and picture, would I want this posted? What if it goes viral? Do I want my next boss to see it when they google me? Do I want dating partners to see it if they look me up? If I become famous for something else, is this a thing I want coming up in features?"

If the answer is no, you would not want that, then don't post it about the autistic person in your life.

It's really appalling that I need to even say that. This is pretty intuitive, isn't it? Who's missing empathy again? Probably the people helping bullies humiliate their children. 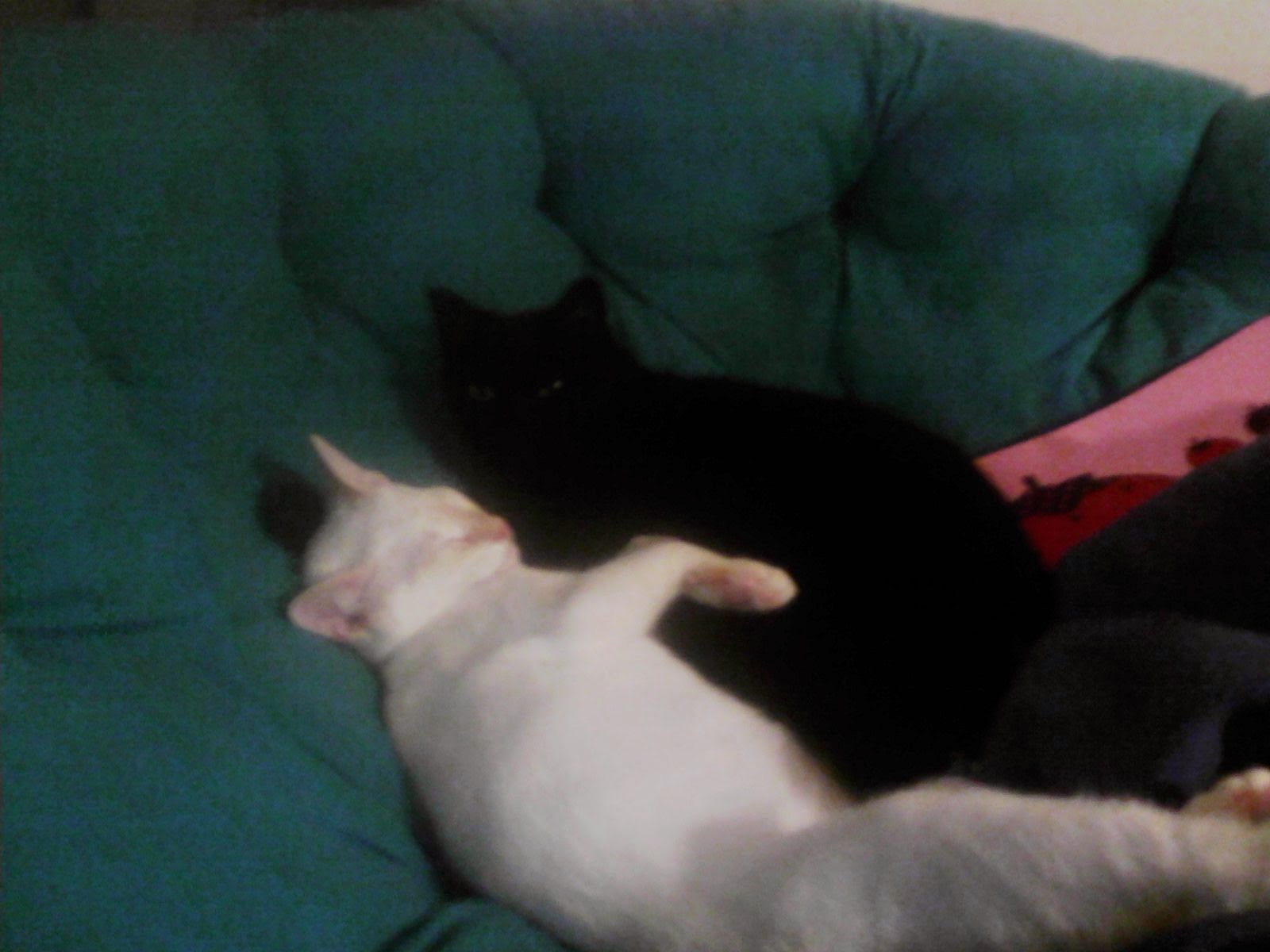 Pic unrelated. It's my cats snuggling in a chair. GABA is barely visible & Purkinje looks smug even in his sleep.
Posted by Neurodivergent K at 4:04 PM

I honestly do not understand what the parents were thinking. I mean, it's such a specific and extreme case of bullying that everyone in the region will know who they're talking about. And they'll talk. How did they expect this not to be counter-productive, if saving their son from further humiliation was their goal?

I can kind of get the motivation behind talking to media in generalities that are non-identifying. But in this kid's case, to people in the region, what happened to him is identifying even without the video (and why the fuck did they find it necessary to share the goddamn video, what the fuck were they thinking?!).

Seriously. Parents. Parents, this isn't hard. Imagine you're a teenager. Imagine you were just humiliated in a very specific way. Would you like your parents to share video of it internationally and talk about it, thus advertizing to the entire community what happened to you? No? I didn't think so. Don't do it to your kid. Don't revictimize them like that.

If it's the kid's choice, that's one thing. But it is not right for you to humiliate your kid by spreading that kind of thing around in public. Seriously. I'm a grownass adult, and I get pissed off when my parents tell "funny stories" of when I got horrendously sick as a child. This is so much worse.

I am appalled at their parenting, and baffled at how anyone can think it's an okay thing to do.

Yeah, and the article DisScoop linked has enough information that I'm sure anyone interested could get the kid's name.

The kitty pic was the perfect wway to end this difficult post.

I agree as far as the parents releasing the video of the fake ice bucket challenge. That was a heinous mistake/horrible judgement. As a person with autism, Asperger Syndrome, I would have been horrified to have my embarrassing encounters with bullies spread around the globe.

I do support, however, Colin's mom in her effort to show her son that despite his lack of friends locally, he could have friends all over the world who would support him. He now has a very popular Youtube channel where he shares his life with fans everywhere who take an interest in many of the same things he enjoys, and he and his mother make weekly videos where fans can ask questions about his interests. His mom monitors the comments and the questions to weed out the negative and/or inappropriate stuff, so I don't see anything about it that would potentially haunt him in the future. I've seen many of his videos, and he is just a happy kid now who obviously appreciates what his mother has done for him. If anything, I wish that someone had done something like that for me when I was his age.

Third-grade teacher once lined the class up to tell me something they like about me. From time to time others have shown up to reassure, support, etc. Attended Autreat for a few years too.

All it taught me is that there is nobody who appreciates me for who & what I am. Plenty of folks who will fake it, though.

I would expect the YT channel described to accomplish the same lesson. Folks are being friendly out of feeling socially obligated, not because they actually want to get to know you any better.

And that's a hellish existence to which to condemn the kid. Frickin' parents.

Everything is so confusing :( How do you help your child the right way!? He asked for the youtube account? She is granting his wishes, isn't she? But as one comment says I want my child to have TRUE friendship not someone who feels obligated and feels pity for him! :(